An explanation on this frame of the Copper’s daily chart :

After completing the bearish leading diagonal wave a(circled), and then its correction in a simple zigzag as wave b(circled), Copper fell down in an impulsive five-waves sequence which is still in progress. Under a bearish alternate view, the ongoing decline may be only as an initial subsequent of sequence c(circled).

An alternative on the ongoing subwaves :

On the assumed first wave of sequence of wave c(circled), its fourth wave is probably completing, and its decline of fifth wave is ahead. An estimated Fibonacci target for bottom of the ongoing decline, could be around the 237.60 level where would be established an equality ratio between the first and fifth waves of the wave (i). 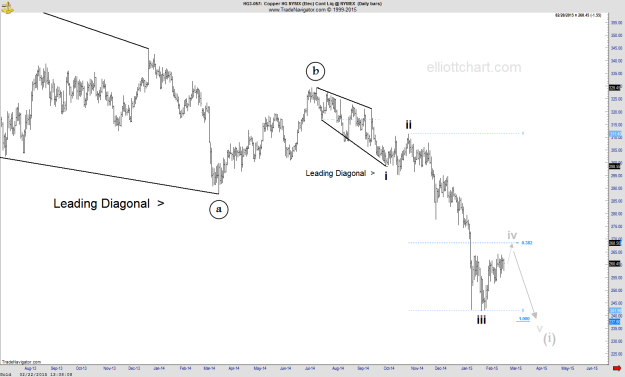