The USDJPY seems to have poised to decline in Minuette third wave, after correcting the Minute impulsive first wave down. The outlook is bearish against the 123.814, in anticipation of Minute third wave underway. 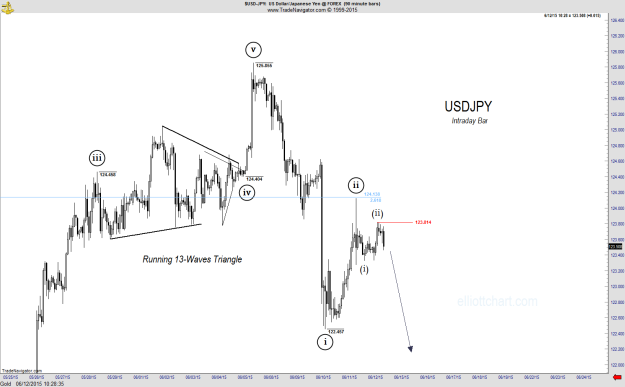 The USDJPY continued to decline impulsively, and has traced out a five-waves sequence through the previous Minute fourth-wave triangle area. This development indicates that Dollar seems to have topped at near the determined target, and would confirm the starting of a bear trend. 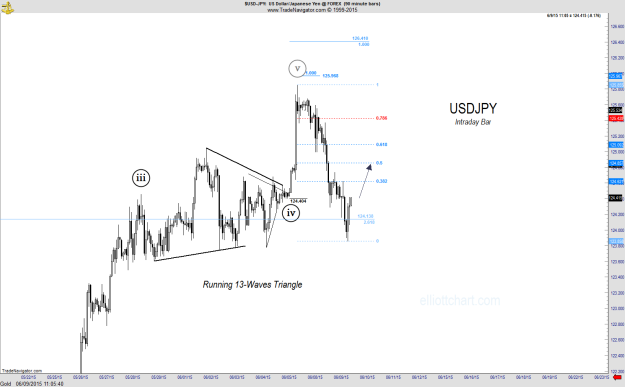 On this 90-minute frame, the “neat structure” of ongoing Minute wave v(circle) so far, suggests that latest fifth wave, of Minuette degree, will likely terminate the overall advance.

Note : Counting 9 or 13 waves in a triangle (triangles always occur in the position prior to the final wave), would lead to a neat structure in the following wave.

Based on this wave count, the immediate outlook remains bullish, now against the 125.365, through the immediate target at 125.968, where the fifth and first Minuette waves are equal.

The USDJPY has thrusted up, from the “Running triangle” as Minute fourth wave, as expected. The current impulsive Minute fifth wave will likely achieve the 126.230, where wave v(circle) equals wave i(circle) – a common relationship.

The immediate outlook tentatively is bullish now against the 125.040, in anticipation of a Minuette fifth wave ahead of Minute wave v(circle), to complete overall sequence of Minor wave 5. 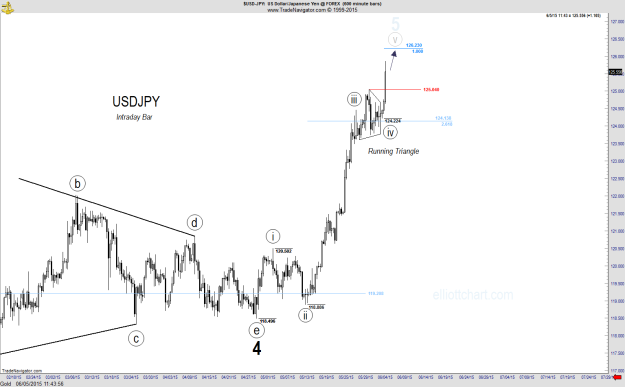 The sideways developing in the late stages :

On this intraday frame, it seems that sideways developing in a “Running triangle” is in its late stages. A triangle always occurs in the position prior to the final wave of the next larger degree sequence. In this case, it is occurring in Minute wave iv(circle), the wave prior to the final rally of Minor wave 5.

Based upon this concept, the outlook potentially remains bullish now against the 123.751, through the estimated target at 126.145, in anticipation of the final rally in Minute wave v(circle). 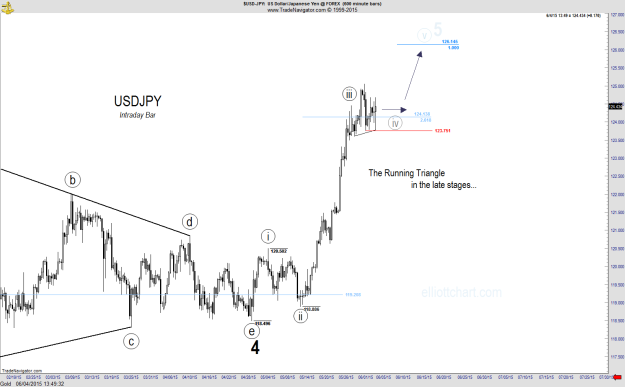 Uptrend in place but expect more sideways in short-term :

After a Minute extended wave (3), the USDJPY seems to be consolidating in the Minute fourth wave, around the Fibonacci 0.618 expansion level at 124.217. The fourth wave may develop as a triangle, flat, or complex “three” and work sideways over the coming days.

Note : Quite often, when the second wave of an impulsive sequence is a simple correction, fourth wave will stretch out into a more intricately formation to achieve a type of alternation.

The broader outlook still remains bullish now against the 123.603, through the estimated near target at 126.218, in anticipation of the Minute fifth wave rally ahead.

USDJPY achieved the area of anticipated target for the Minute third wave. As shown on this Intraday chart, A pullback in Minute fourth wave and resuming the rally in Minute fifth wave likely lie ahead prior to end of the advance in Minor wave 5.

The wave structure of the advance developing in Minor wave 5 sustains the uptrend still in place.