The Crude Oil’s bear market could have concluded by Minor-degree extended wave C, in the February extreme-low at 26.05.

Technically, in the weekly frame a five-wave structure of Minute-degree to the upside will confirm the medium-term bullish case. 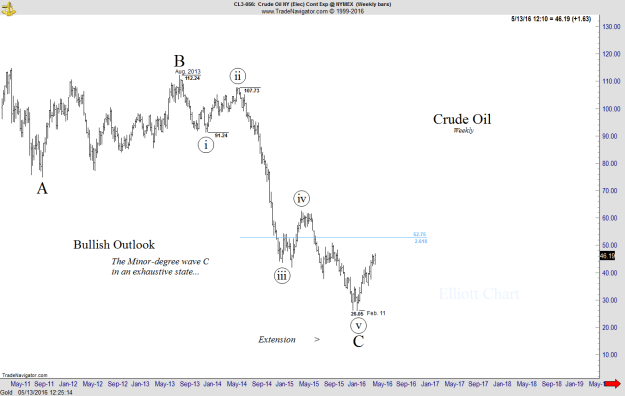 As denoted by the labels on the weekly chart below, the extended Intermediate wave (3) could have concluded its five-wave sequence down that started in August 2013.

Subsequently an upward corrective sequence, to the Fibonacci 0.382 retracement level, as Intermediate fourth-wave developing is anticipated for months ahead. 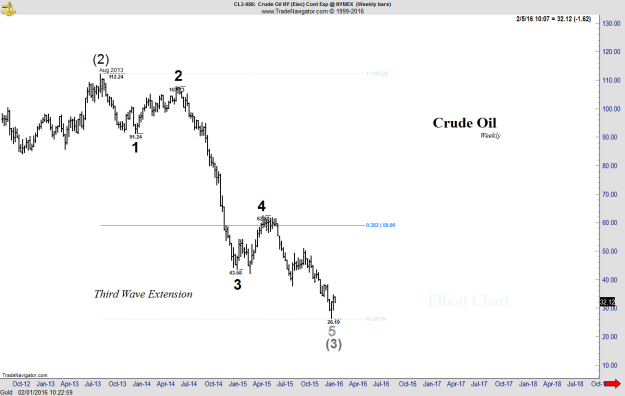 As denoted by the labels on the weekly chart below, the extended Intermediate-degree wave (3) could have completed its structure as a five-wave to the downside.

Subsequently a corrective retrace up, to the 0.382 Fibonacci level, as the same degree fourth-wave developing could be expected for coming weeks. 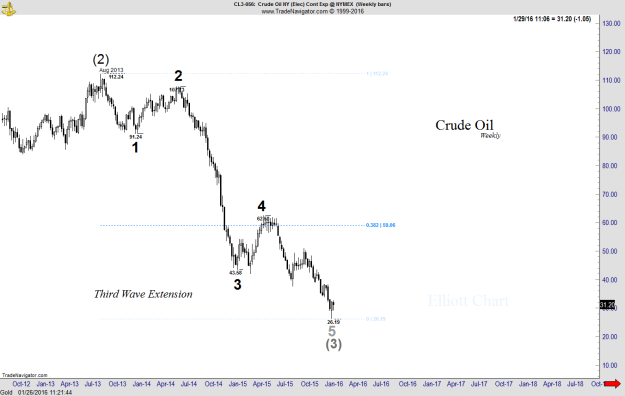 As denoted by the labels on the weekly chart below, the extended Intermediate wave (3) seems to have completed its five-wave structure.

A corrective retrace up, to the 0.382 Fibonacci level, as the fourth wave could be expected now. 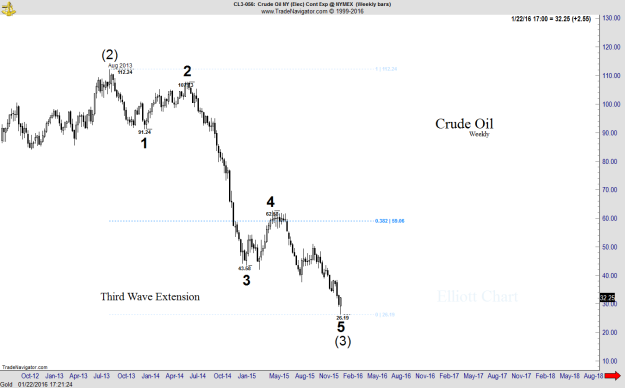 As shown on the weekly-chart below, Crude Oil could have completed a five-wave structure as the Minor-degree wave C. 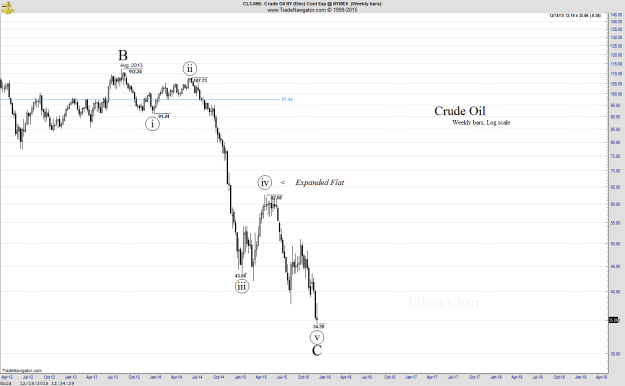 The Crude’s bearish stance remains intact in weekly frame. The ultimate fifth-wave down would be a sharp decline that will draw prices below the August 24 low at 37.75.

It is expected the market will search for its extreme low until the late December. 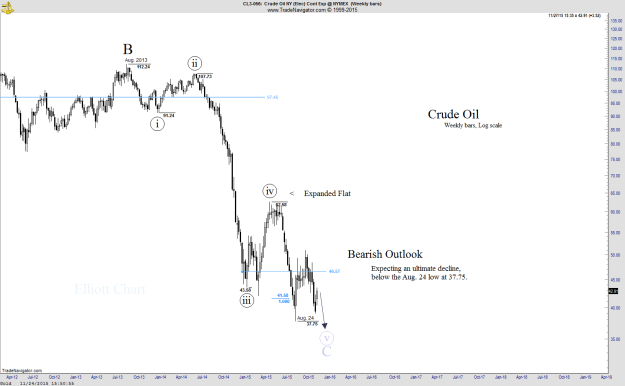 Crude engulfed the prior week by its persistent selloff. The next-Minuette-degree wave down would be a sharp decline that draws prices below the August 24 low at 37.75.

After the expected third-wave decline, the market will search for an extreme low in its final fifth-wave of the same degree. 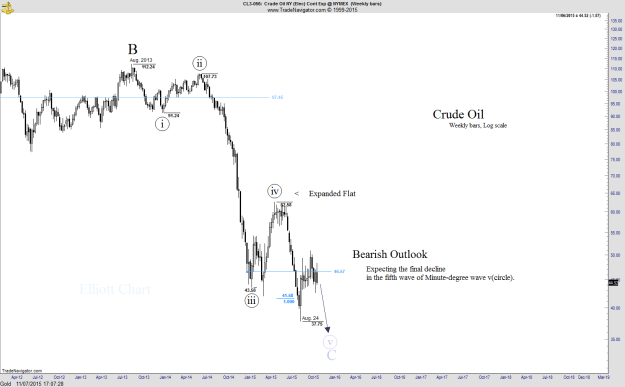 Crude Oil has been moving in sideways during the September. An upward push will morph the advance since the August low into three waves, that will lead to unfold Minuette- degree three waves in sideways, as the Minute fourth-wave which remains in progress.

A decline exceeding the 37.75, the August 24 spike low, would indicate an attempt at achieving a significant extreme. (Bearish outlook on the 2nd chart) 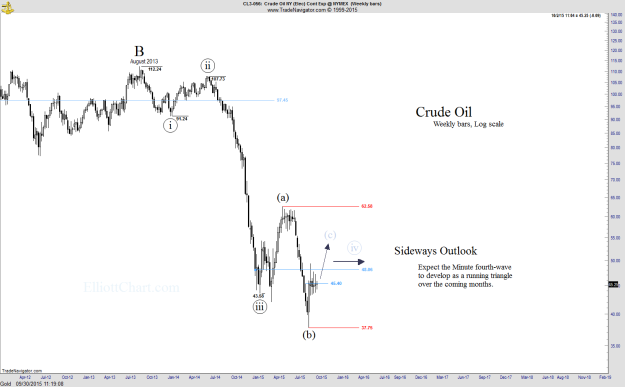 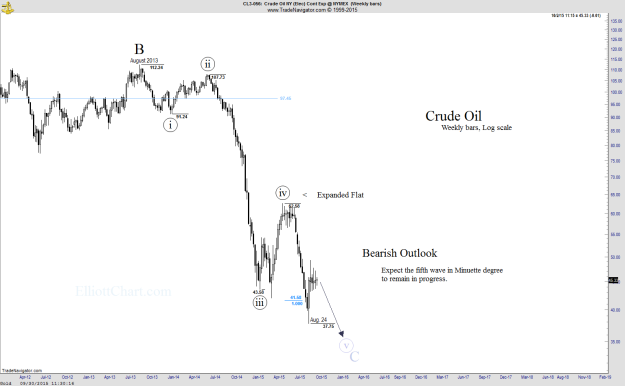 In the weekly frame, Crude Oil could have terminated the decline of its Minor wave C, which started at the 112.24 high on August 2013, in the five waves of Minute degree.

The 37.75 could be a Significant low, as the extreme point of Minor wave C, that was registered a slightly lower than expected target at 41.58, However, the structure of decline in Minute fifth wave dose not look to be complete as a five-wave.

A five-wave advance of Minute degree is the wave structure that will indicate to change of the trend to up. 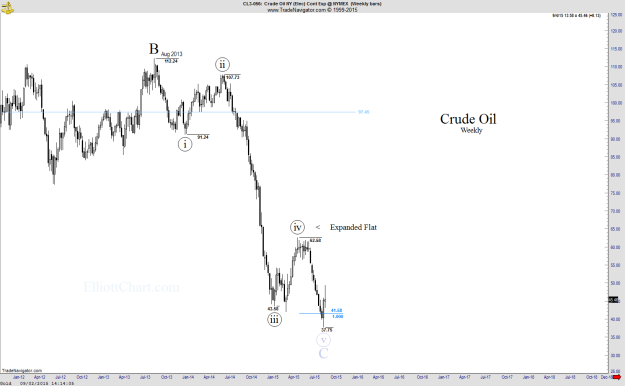 The Crude Oil has started the week in another strong rally, that would suggest to respect the possibility that 37.75 could be a low of more importance, which was registered a slightly lower than expected target at 41.58.

A five-wave advance of Minute degree is the wave structure that will confirm the trend change. 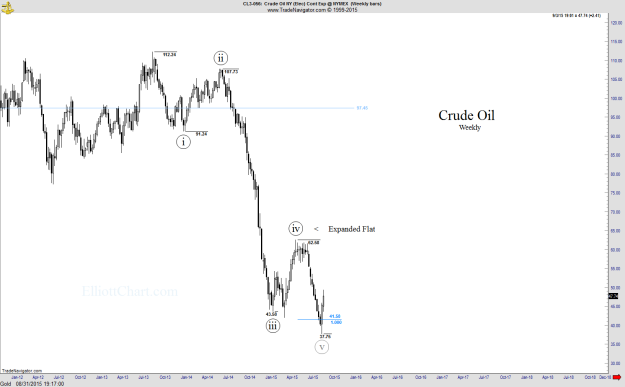